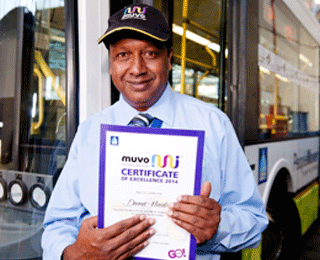 Durban bus driver Deena Dayalan Naidoo was awarded as Durban’s best bus driver for the month of April as part of the Move to Muvo Campaign.

Deena Naidoo was previously employed by the Airports Company of South Africa as a courier of flight documentation and through sterling work was promoted to shuttle driver, transporting passengers from platforms to their destined flights. A resident from Hilary in Durban, Mr Deena Naidoo has been driving one of the People Mover buses in the city for over 5 years. Often found doing his daily commuter route passing the famous Indian Spice Market, Warwick Junction, the Botanical Garden, West Street and South Beach, Naidoo says that he really enjoys his job. “I love my job, interacting with the different people of our beautiful, sunny city brings great joy to me. I believe that as a driver to respect and help all of my passengers at all the time is part of my job and I always look forward to that.”

He was awarded the Best Bus Driver of the month award voted for by the commuters for being a good ambassador and assisting commuters with their Muvo cards.

From April 1, bus coupons have been discontinued, and replaced with the new Muvo Smartcard, which will provide a safer, more efficient way of paying for public transport. The card is part of GO!Durban, the massive Integrated Rapid Public Transport Network, that will eventually be used on all the public transport within the network which sees the integration of  public transport with dedicated lanes for busses and upgraded transport corridors for rail.

The card is being issued free of charge until further notice.